I started making hunting knives for my own use in the late 70´s. Stayed at the time in Hässelby outside Stockholm. 1984 I moved to Hälsingland, where I was born and raised. As for the knifemaking it was developing. There I met, among others Kaj Embretsen, Sven Erik Loodh, Ove Wallin, Conny Persson and Sven Arne Persson. They helped with inspiration and tricks.

The years 1993-2003 I participated in knifeshows in the U.S. once or twice a year. 1999 I became a member of the Knife Makers Guild. Was allso at fairs and exhibitions in Germany during this time. 1994 I started Nordell Knives AB which I ran until 2009.

Nordell Knives AB is now being continued by the new owners and remain in the same premises in Ljusdal as before. Hope now have more time to hunt, make blades and especially knives 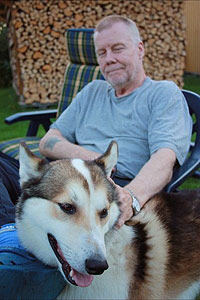